Project on desertion and rejection of war
Some day they´ll have a war and nobody will come. Carl Sandburg, 1936


The anonymous Flemish poet from the First World War describes his suffering. Again and again, he is wounded and being patched up, sent off to the front again. Eventually, he gathers all his courage and deserts. Or listen to the anonymous Flemish poet in a booklet issued in 1800:
When I am deserted, // till Mechlen I went // The French there caught me // Me thinking, where will  this end
The poet complains about his fate because he is first sentenced to 8 years in prison. After “a befriended intervention from higher places”, an appeal  reduces the sentence.
Maybe the best known poem honouring a deserter has been written and sung by Boris Vian: Monsieur le Président // je ne veux pas le faire // je ne suis pas sur terre // pour tuer de pauvres gens – Mister President // I don't want to do it // I'm not in this world // to kill the poor people.

Still today, desertion (there is an other Dutch word, equivalent to fleeing the flag) is  branded a very serious military crime. Yet, throughout the centuries and on all fronts there have been people who have deserted. History books are silent about it, publicly silent. Desertion in war time has  often occurred for personal reasons, e.g. because of the horrible circumstances at the front, or because someone has had to take care of the family at home.
Desertion however has always been an act of resistance as well, resistance against the logic of war, resistance against the military moral discipline. The deserter not only tarnishes the blazon of the nation's army, but the nation itself. The Nation takesit for granted that it can   commandeer soldiers and  put their lives at stake.

“Now, millions of proletarians of all tongues fall upon the field of dishonor, of fratricide, lacerating themselves while the song of the slave is on their lips.” This is a quotation from the Junius pamphlet of Rosa Luxemburg in 1915.  “Reduced to its historically objective essence, today’s world war is entirely a competitive struggle amongst fully mature capitalisms for world domination, for the exploitation of the remaining zones of the world not yet capitalistic.”  Unfortunately, this analysis has not yet lost any of its strength. Just think of Afghanistan, Iraq, Lybia, Palestine,...

Rejection of war
Reflecting about desertion  is thinking therefore about the reasons why wars are  conducted. During World War I, a great number of anti-military and pacifist voices were heard. There was an entire movement of “conscientious objectors” in Great-Britain. Gardiner, a British war objector, declared to the tribunal that the war was being fought against England, not against him personally “I don't think my name has been brought up at all in the German Reichstag.” (Hudderslfied Military Service Tribunal, March 20th, 1916). In France in 1917, mutinies occurred in solidarity with the Russian revolution.The  Flemish actress and writer Denise De Weerdt examined in her book Vrouwen van de Eerste Wereldoorlog (Women of the First World War) different forms of resistance by women 'behind the front lines'.

In Belgium, the statute of conscientious objector is now past tense. It has been abolished together with military service. However, on March 24th, 1995 Home Office minister Johan Vande Lanotte answered  to a question in Parliament “that in war time conscientious objectors anyhow will be integrated in the army, although they will not have to carry weapons.” The Belgian military codex as in the law of July 10th, 1996 still holds severe punishment for desertion in peace time (article 46) and even more severe in war time (article 48). Very recently on June 1st, 2011 the European Court for Human Rights decided that conscientious objections againsthand military service are a human right. In Israel, Turkey and Russia, e.g., there is no such right.

Deserters say^” no” to the slaughtering in any case: “This is not my war”. Their voice ought not to be lost in the noise, pomp and circumstance 100 years after World War I. We want to listen to their voices,hand  them a megaphone and demand rehabilitation for all deserters who turned away from the war. Great-Britain, Germany, France and the Netherlands, have taken initiatives for rehabilitation and the rehabilitation of deserters. For the 10 Belgian soldiers shot for “leaving the post of duty in presence of the enemy” there hasn't ever been any attempt at rehabilitation. Neither Minister of Justice Onckelinckx (8/8/2003)nor minister of Defence Flahaut (16/1/2007) found any ground or reason to rehabilitate these soldiers.

Modern forms of desertion
Desertion as a form of questioning  the military logic is not a phenomenon of former  times only.   Shouldn`t those who refuse to pay the defence part of their taxes be classed modern deserters? In the US, the Peace Movement shouts aloud :.Not in our name !at worldwide military interventions, illegal detention and razzias. People have  deserted equally from professional armies, from so-called clean wars with precision bombings, and from privatised warfare. Moreover, military operations use civil infrastructure.In early 2003, an army marched through Belgium. Thousands of military units travelled by train, canal and roads to the port of Antwerp to be shipped to the war in Iraq. Dock workers and rail workers suddenly participated in a war. No one was asked whether  he or she was prepared to do so.

Hence this project. Because,as we do, they dream of the day that “someday they'll have a war and nobody will come”. deserters gave and still give a  good example. For war tourists and peace loving citizens, this theme should not remain unmentioned during the commemoration of the Great War.This was  only  “great” in its madness and destruction.And the loud cries of the deserters should help us not to forget.

Specifically then, we  too demand that attention be paid to the rehabilitation for those executed and for all deserters of the First World War, and for the right to modern forms of desertion, such as refusal to pay war taxes and the right to refuse to work in preparing a war.

There will be three parts in the desertion project:
an information section:looking deeper into  the relevance of the desertion and rejection of war themes,providing  an historical and contemporary perspective, through articles, lectures, an exhibition, course packages, etc. The non-profit-making organisation Vzw Vrede takes this on board
a music section : a project with national and international choirs  with existing songs and new compositions
an artistic-sculptural section : sculptural and video artists start working on the theme, which might lead to a “monument  to the unknown deserter”. Belgium deserves one. The monument could in itself become the centre of other artistic initiatives.

A kick-off day in 2014 will announce the project. Its duration will be a year, between the International Peace Days 21 September 2014 and 20 September 2015. It will be supported by a website (www.desertie.be)  among other weekly historical, artistic or journalistic texts on the theme.
Gepost door Brussels Brecht-Eislerkoor op 00:03 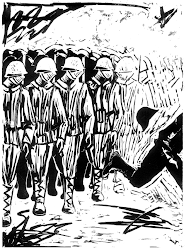